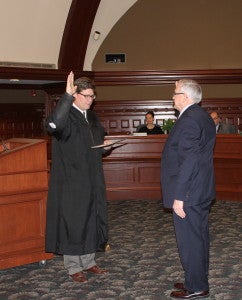 Dan Moore, partner at Moore Heffernan Law, was sworn in as Mayor Pro Tempore on January 4, 2016.  Moore was selected by the Mayor of Sioux City, Bob Scott, to serve in this capacity for the next two years. He will continue to serve on the City Council as Mayor Pro-Tem and will be responsible for fulfilling Mayor Scott's role when Scott is unable to do so.

Moore is very excited for this position and stated he “appreciates the confidence and trust the mayor has placed in him with this appointment.”  Mayor Scott was also sworn in on January 4th, becoming the longest serving mayor in Sioux City history.

Dan has been practicing with the firm since 1977. His practice is focused primarily in real estate law, business law, agriculture law, zoning and land use law, and estate planning.